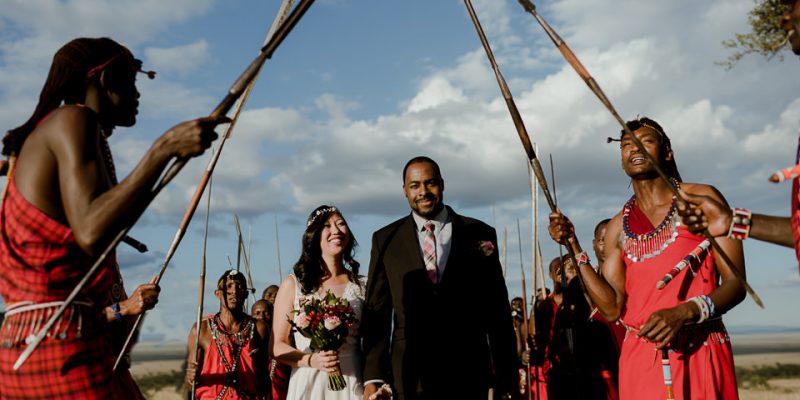 For centuries, In Europe, UK and America June has been considered the most popular month for weddings, though it has fallen slightly behind July and August in recent years.  And while couples may enjoy these relaxing summer months to celebrate their nuptials, they’d find themselves in rainy, dreary weather this time of year in Africa.

April through July is wintertime in Africa, and temperatures—in wedding-hotspot Cape Town, for instance—can dip to freezing.  But during the right time of year, Africa offers some of the most beautiful wedding destinations in the world.

The best months for weddings in Africa are July through November (springtime) and December through March (summertime), when the continent experiences a burst of flowers `in bloom, an abundance of wildlife, warm nights and breezy beaches.

Here are 10 of the best places to get married in Africa:

French author Jacques-Henri Bernardin de Saint-Pierre set his 1788 romantic novel ‘Paul et Virginie’ on the island of Mauritius because he viewed it as a sort of paradise on earth – a notion that still prevails centuries later for lovers who seek out the Indian Ocean Islands of Mauritius and the Seychelles where weddings and Honeymoons blend the luxurious with the exotic. These tropical islands which are also known for its palm trees, white sandy beaches, blue lagoons and coral reefs, are located off the coast of East Africa. Both Mauritius and the Seychelles have been international destinations for savvy travelers. The Seychelles have been welcoming camera shy celebrities since the 1970s. While Mauritius has become one of the top luxury destinations in the world.

Well known as the gateway to South Africa. Cape town is an extraordinary city that holds many beautiful places to tie the knot, and is one of the top destinations in the world for good reasons. They are so many stunning wedding spots in Cape Town that you would be literally spoilt for choice, from there vast vineyard options, to breath taking beaches of the Atlantic Ocean, to the venues overlooking magnificent mountain ranges i.e. the famous Table Mountain, or even a wedding situated in the heart of a plantation, with an array of modern and rustic venues.

Zanzibar Island (Ranked 3rd in the world for Romantic Weddings)

Known as Tanzania’s Spice Island, Zanzibar is a tropical island located in the Indian Ocean off the coast of Tanzania. With powdery white sand beaches and turquoise blue waters, Zanzibar is a magical Indian Ocean retreat infused with African and Arabian sentiment and great honeymoon options. Off the north coast is the Pemba Island. According to the Africa Odyssey website, it is one of the most exclusive destinations in Africa and has been voted by Condé Nast among the top three romantic beach locations in the world.

Known as the “Eighth Wonder of the World,” the Ngorongoro Crater also located in Tanzania, is the world’s largest inactive volcanic caldera. Ngorongoro provides an authentic Maasai wedding on the rim of the crater with local chief dancers and a choir. We can create Wedding ceremonies on the Crater floor or on the panoramic terrace of the lodge.

If you are looking for Safari romance, the Maasai Mara is one of the best places to have your wedding. Known as the theatre of the “Greatest Animal Show on Earth,” the Maasai Mara is the most famous wildlife conservation in Kenya. Kenya offers open savannah plains, breathtaking balloon rides, and luxury lodges where, due to the abundance of wildlife, traditional Maasai warriors escort visitors on the property. The Maasai Mara is located about 157 miles southwest of Nairobi along the Tanzanian border and the Serengeti National Park.

Located in the Indian Ocean, Madagascar is interesting as much for his sandy beaches—where a couple can enjoy swimming in clear waters, snorkeling, and whale watching—as for its lush interior of beautiful national parks, forests and inactive volcanoes. Tana, the capital of Madagascar, is home to several markets, churches, and former royal buildings. In Tsingy de Bemaraha, in the country’s west, is a nature reserve where you can find incredible landscapes, including limestone formations and preserved forests. In northern Madagascar, there are rainforests, waterfalls, crater lakes, and the Montagne d’Ambre national park that extends across a volcanic massif for those looking to share a honeymoon adventure.

The Island of Mozambique is a small coral island located at the mouth of Mossuril Bay in the Mozambique Channel of the Indian Ocean. What makes the island beautiful is the historic architecture of its buildings. Noted for their diverse Arab, Indian and Portuguese influence, these extraordinary buildings can make a spectacular backdrop for a couple’s wedding. Notable buildings include the chapel of Our Lady of the Ramparts, the church of Our Lady of Mercy, and St. Paul’s Palace, the governor’s residence from 1763 until 1935 that now serves as a museum.

Victoria Falls is a waterfall located in southern Africa on the Zambezi River between the countries of Zambia and Zimbabwe. It is over a mile wide and has been acclaimed as one of the Seven Natural Wonders of the World. Victoria Falls is nearly twice the size of Niagara Falls, with peaceful lagoons and islands filled with wildlife. As for honeymoons, the famous Victoria Falls Hotel offers sunset river cruises, guided game drives, and micro light flights over the falls.

Botswana is a wedding location for couples desiring adventure and wildlife. Botswana is a land of delta and desert areas, grasslands and savannas, the unusual blue wildebeest, and all members of the “Big 5”: lion, elephant, leopard, rhinoceros and Cape buffalo.  In the Northwest region of the country is the Okavango Delta, the largest inland delta in the world. Along the waterfront is the Moremi Wildlife Reserve, the destination for a safari romance. Other highlights of Botswana include the capital city of Gaborone and the village of Serowe, a center for royalty. As for honeymoons, Botswana likes to keep it exclusive and luxurious, from lavish five-star hotel suites to intimate safari camps.

Namibia is a country where the sun shines 300 days of the year. Along the Atlantic coast stretches the 80-million-year-old Namib Desert. Couples looking for adventure can river raft, canoe, and horse ride through the country. This West African nation’s most famous location is the Etosha National Park in the northern part of the country. The park is home to elephants, zebras, cheetahs, rhino, lions, and more. At one of the Park’s several wedding venues, couples can tie the knot while a striking savannah sunset emerges as a memorable backdrop.